Here are contemporary accounts of the sound recording of the Burial of the Unknown Warrior, on 11 November 1920 by Lionel Guest, later of Ferring, and Capt. Merriman.

HOW MUSIC AT THE ABBEY BURIAL OF THE UNKNOWN WARRIOR WAS RECORDED IN A LORRY OUTSIDE THE BUILDING; A NEW ELECTRICAL PROCESS

The first gramophone records ever taken in Westminster Abbey were obtained at the funeral service for the Unknown Warrior on Armistice Day by means of an electrical process invented by Major the Hon. Lionel Guest and Capt. H. O. Merriman, a Canadian electrical engineer. Outside the eastern end of the Abbey was stationed a lorry containing a workshop with the recording mechanism. This consisted of the usual gramophone turn-table with a revolving wax disc, but, instead of a recording diaphragm operated by sound, it had an electrical device for engraving the wax. The recording machine was connected by wires with four sound-receivers placed at different points. At each of the points was posted a signaller, who by pressing a button on a microphone transformer-board signalled to the operators in the lorry when to begin and cease recording. The two records are published at cost price (7s. 6d. The pair) by the Columbia Gramophone Co. for the Abbey Restoration Fund. Orders by be sent to the Precentor, Little Cloisters, Westminster.

Expand the illustration on the right, to see interesting detail. 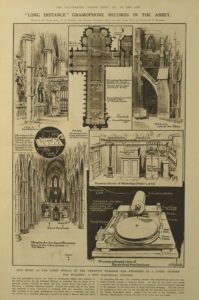