A working-class hero in genteel, conservative, ever-so-slightly toffee-nosed Worthing? In a prim resort where the cultured retired took tea at Fuller’s, bought water colours at Aldridge’s and gave the fleshpots of Brighton the widest possible berth?

Not unexpectedly, Worthing’s man of the people was no socialist firebrand or militant trade unionist. He was a friendly, affable postman with a love of archaeology. Indeed, such was his passion for archaeology that for almost 40 years he dug deep into the chalk of the South Downs to reveal the secrets of Neolithic Sussex. His name was John Henry Pull and he would go on to become one of Britain’s most remarkable amateur archaeologists.

Although John Pull died almost 60 years ago in circumstances that have lost none of their horror, he’s virtually unknown in Worthing. The town’s museum and its resident archaeologist, James Sainsbury, tend the flame of his memory, but Pull has yet to be honoured with a blue plaque on St. Elmo Road where he lived. At our May meeting Sainsbury introduced us to the long-forgotten in a lavishly-illustrated talk entitled “John Pull and Britain’s First Industrial Landscape.” 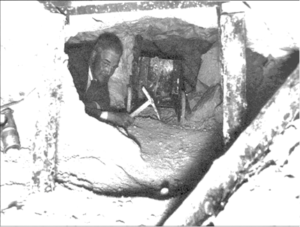 John Henry Pull was born in Arundel on June 25th 1899, the son of Albert Pull, a foreman at Arundel Castle. At school he won competitions for writing and he delighted in drawing and painting wildlife. He served as a private in the Rifle Brigade in the First World War and fought on the Western Front where he was gassed and captured by the Germans. Somehow managing to escape, he was hidden by the Ursuline convent at Mons in Belgium. “He kept in touch with nuns for the rest of his life,” Sainsbury told his Ferring audience. After the war John Pull worked as a gramophone and record salesman, postman, and security guard in Worthing.

As Sainsbury made clear in his talk, John Pull is chiefly remembered for his work on Blackpatch Hill, a site of Neolithic flint mines three miles west of Cissbury and one mile southeast of Harrow Hill that’s visible from Long Furlong. Pull was only 23 years old in 1922 when he noticed a cluster of some 100 craters there. With the help of the Worthing Archaeological Society he began excavating one of the shafts. Blackpatch would keep him busy for the next 10 years.

As Sainsbury told his listeners, the South Downs above Worthing contained one of Britain’s largest and most important flint-mining centres in Neolithic times. “For a thousand years there were over 600 flint mine shafts above what would become Worthing,” he explained. Four of Britain’s 14 confirmed Neolithic flint mines – Blackpatch, Harrow Hill, Church Hill in Findon and Cissbury – are to be found within seven miles of the centre of Worthing. Thought to date from the 5th millennium BC as well as the 4th millennium, they represent some of the oldest mines in Europe. “They are certainly the earliest industrial landscapes in Britain,” Sainsbury declared.

He explained that the South Downs were heavily forested in Neolithic times and that, before the advent of metal, Neolithic man needed a steady supply of axes, adzes, knives and chisels if the woodland was to be cleared and crops planted. Archaeologists think that Neolithic man went to the trouble of digging down to seams of flints because, unlike the weathered flints on the surface, the subterranean ones were far less likely to crack.

Pull and his friend Cyril Sainsbury (no relation to James!) worked on the Blackpatch site until 1932 and, according to James Sainsbury, opened at least nine shafts. These revealed a network of galleries and yielded red deer remains such as antler horns for prying flints from chalk and shoulder blades that doubled as shovels.

As Sainsbury related, they also cleared four flaking floors where flints were worked with a hammer stone and polished with sandstone and discovered what they maintained were the miners’ dwellings. These consisted of a number of shallow depressions containing pottery, flint flakes and implements – axes and scrapers – along with sandstone rubbers, animal bones and burnt flints. They also examined 12 barrows or burial mounds containing cremations and inhumations. One collection of cremated bones was accompanied by a flint axe, knife and scraper.

Sadly for Sussex archaeology, the Blackpatch site was ploughed over in 1950 or thereabouts. Regrettably, as Sainsbury explained, Pull found it impossible to get his early excavation reports on Blackpatch published by the Worthing Archaeological Society. His humble origins seem to have offended a supercilious society which considered him impertinent for daring to trespass where only the archaeological establishment was fit to tread. Its message seemed to be: Sussex flint mines are no place for the proletariat.

Pull’s chief tormentor was the bespectacled doyen of Sussex archaeologists, E. Cecil Curwen. The son of the distinguished archaeologist Eliot Curwen, he had been educated at Rugby and Cambridge and was a member of the society’s Earthwork Sub-Committee.

It was hard to believe that the Worthing Archaeological Society could behave any more offensively. But in a supreme act of spite it then proceeded to publish Pull’s work under Curwen’s name. Pull was so disgusted that he resigned from the society. As a result the snub, Pull published most of his results in local newspapers and later brought out a well-received book on his Blackpatch excavation entitled “The Flint Miners of Blackpatch.”

After finishing their work at Blackpatch, Pull and Cyril Sainsbury moved on to investigate the flint mines of Church Hill which lie about 1,000 feet south-west of Findon Church and one and a half miles due west of Cissbury. Church Hill, as James Sainsbury told the Ferring meeting, is thought to be the oldest flint industrial site in Britain dating back to 4,000 BC. In digs that lasted from 1933 to 1939 and from 1946 to 1952, Pull and his companions cleared shafts, pits and flaking floors at the site and discovered scrapers, knives and saws in the process. One of Sainsbury’s most arresting illustrations showed a flint blade inserted into the prong of a red deer antler that came to light in a Church Hill shaft. The team also examined numerous barrows. Sainsbury noted that Barclay Wills, the great authority on Sussex shepherds, assisted Pull in his Church Hill excavations. Like Blackpatch, the site was subsequently flattened by heedless ploughing.

Judging by Sainsbury’s illustrations, Pull was never improperly dressed for archaeology. The dress codes of the day had to be maintained even when burrowing into a flint mine on the South Downs. In most photographs he’s wearing a shirt and tie with a suit (often with a waistcoat) and a natty hat. In hot weather he removed his jacket and rolled up his sleeves but his tie often remained firmly in place. There was no excuse for slovenliness. His one concession to his calling was a pair of robust boots. Pull was an inveterate pipe smoker and, as numerous photographs indicate, his pipe was an ever-present companion.

On March 8th 1952 Pull and his colleagues began work on the Cissbury flint mine field which lay just outside the south-west corner of the famous Iron Age hillfort. Shaft 27 was their first target. At the entrance to a gallery leading off the bottom of the shaft they found a skeleton thought to be of a miner who had died in a roof collapse. But, as Sainsbury noted, Pull later concluded that the skeleton was that of a young woman, aged about 20, who was holding the remains of a burnt-out torch in her hand.

According to Sainsbury, it’s not clear whether she was killed by a roof fall or tumbled into the workings. It’s also possible she was placed at the gallery entrance as some form of sacrifice. Sainsbury remarked that one of the chalk blocks under the skeleton was stained brown. He thought it was probably iron oxide from the victim’s blood.

Shaft 27’s galleries also yielded a small fish carved out of bone known as the “ivory fish.” Some experts have claimed that it looks suspiciously like a post medieval gaming counter. In another gallery off the shaft, Pull and his team found the incised drawing of a short-horned bull’s head and facing it, that of a red deer. Sainsbury pointed out that the former appears to have a tether around its neck.

John Pull called time on his Cissbury excavations in early 1956 after a particularly cold winter. He had rejoined the Worthing Archaeological Society in 1947 and after a spell on the committee, was elected its chairman in 1952. The rancor of the Blackpatch years had ebbed away. But four years later Pull was dead.

As a postman and a civil servant he had been compelled to retire at the age of 60 in 1959. A few months later he got a job as a security guard at the newly-opened branch of Lloyds Bank in Durrington. Tragically, during an armed raid on the branch on November 10th 1960, he was murdered by a 20-year-old petty criminal called Victor Terry who shot him in the face with a single-barrelled shotgun. Pull was 61 years old. Found guilty of capital murder, Victor Terry was hanged at Wandsworth Prison on May 25th 1961.

Paying tribute to Pull in his Ferring talk, Sainsbury said his discoveries “are nationally significant. Much of what we know about the Neolithic Age is down to John Pull.” He noted that the genial archaeologist “left the majority of his collection to Worthing Museum on the condition it was used to educate the local people about their ancestors.” Asked about the John Pull display in Worthing Museum, Sainsbury replied: “It’s permanent and should be there for years yet!”

After James Sainsbury finished his talk, Richard Beales, a retired senior official with the Department for International Development and an amateur archaeologist took the floor. As a small boy, Beales had met John Pull. “He was well known for stimulating enthusiasm for archaeology among a wide range of ‘ordinary’ people,” he recalled. Pull had started to excavate in 1953. It was after the skeleton had been discovered there, so it must have been in the summer after the Coronation. I was 9 years old at the time.” Beales descended the celebrated Shaft 27. “Having climbed down the ladder, I met John Pull at the bottom and was encouraged to crawl through the galleries where he saw antler pick marks in the walls,” he told the Ferring audience. “This made a great impression on me, and stimulated a lifelong interest in archaeology.”

Beales brought a collection of flints with him to the meeting.

“Pull encouraged me further by presenting me with some worked flints from his earlier excavations mainly at Blackpatch,” he said. “They all bear dates, location and his distinctive JHP monogram.”Beales told the audience that after 65 years he felt it was time the flints were returned to the Worthing Museum’s John Pull archive. Glancing over at Sainsbury he said: “I hope that James will accept them this evening and return them to their rightful place.” To loud applause, the flints were formally repatriated. 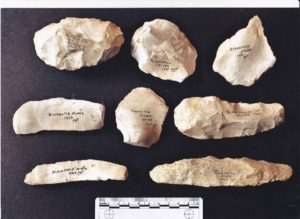